The need to stabilize greenhouse gases in the earth’s atmosphere is the great environmental challenge of this century. Approximately two-thirds of the total increase in atmospheric CO2 is the result of burning fossil fuels, with the remainder coming from soil loss due to land use change, such as deforestation for food production [1]. Soil loss causes a depletion of soil organic carbon which releases CO2 into the atmosphere. Globally this has created a soil carbon deficit. However, this now presents an opportunity to restore and capture more carbon in soil through a variety of land management approaches, termed soil carbon sequestration.

This document will summarize how soil carbon sequestration could be used to reduce greenhouse gas emissions in the atmosphere and how this can be applied to the agricultural industry.

How is agriculture part of the solution to climate change?

Globally, the agricultural sector accounts for 14% of anthropogenic greenhouse gas emissions, and if you consider carbon emissions from production of fertilisers, deforestation, etc, this quickly rises to 30% [1,2].

In the UK emissions from farms currently account for 10% of UK greenhouse gas emissions (GHG). But in stark contrast to the rest of the economy only a tenth of farming GHG emissions is carbon dioxide (CO2). More than half of agricultural GHG emissions are methane (CH4) and nearly 40% are nitrous oxide (N2O) [3]. Reducing emissions from methane and nitrous oxide is more difficult than cutting carbon dioxide, because both methane and nitrous oxide result from natural and complex soil and microbial processes. However, by enhancing the ability to capture carbon in soils and plants, farmers can generate ‘negative emissions’ by removing CO2 from the atmosphere to balance the CH4 and N2O emissions from food production [3]. Carbon capture using soil and plants is commonly known as soil carbon sequestration. 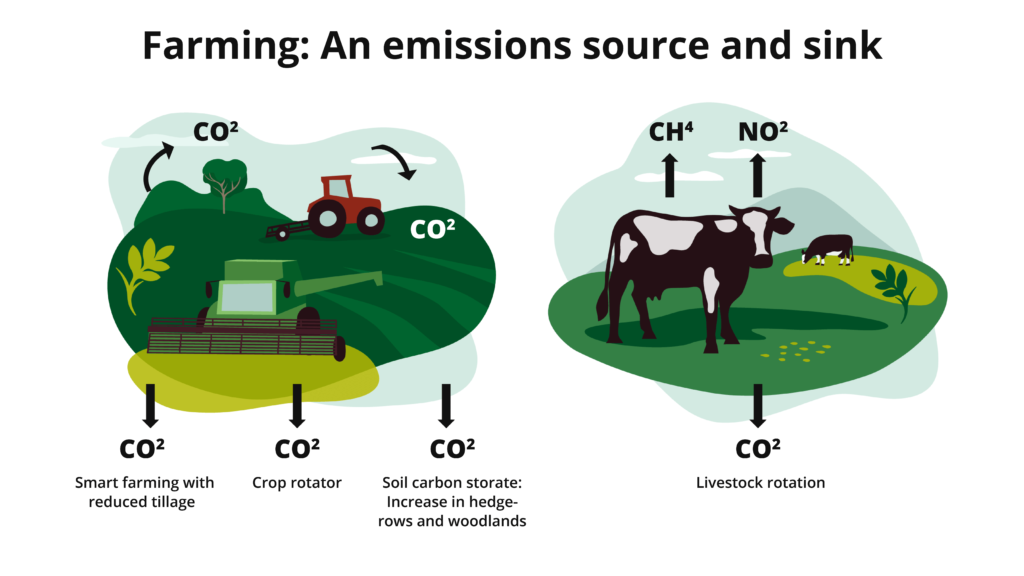 What is soil carbon sequestration?

Soil carbon sequestration is a process whereby CO2 is removed from the atmosphere and stored in soil. This process is largely facilitated by plants through a process called photosynthesis. During photosynthesis plants absorb CO2 from the atmosphere and use it to make organic compounds which are vital for the plant growth. Once the plant dies or sheds its leaves, soil organisms such as bacteria, fungus and earth worms etc, breakdown the decomposing plant material transforming it into organic matter or “soil organic carbon” [4]. Soil organic carbon in the soil stores carbon preventing it from re-entering the atmosphere. 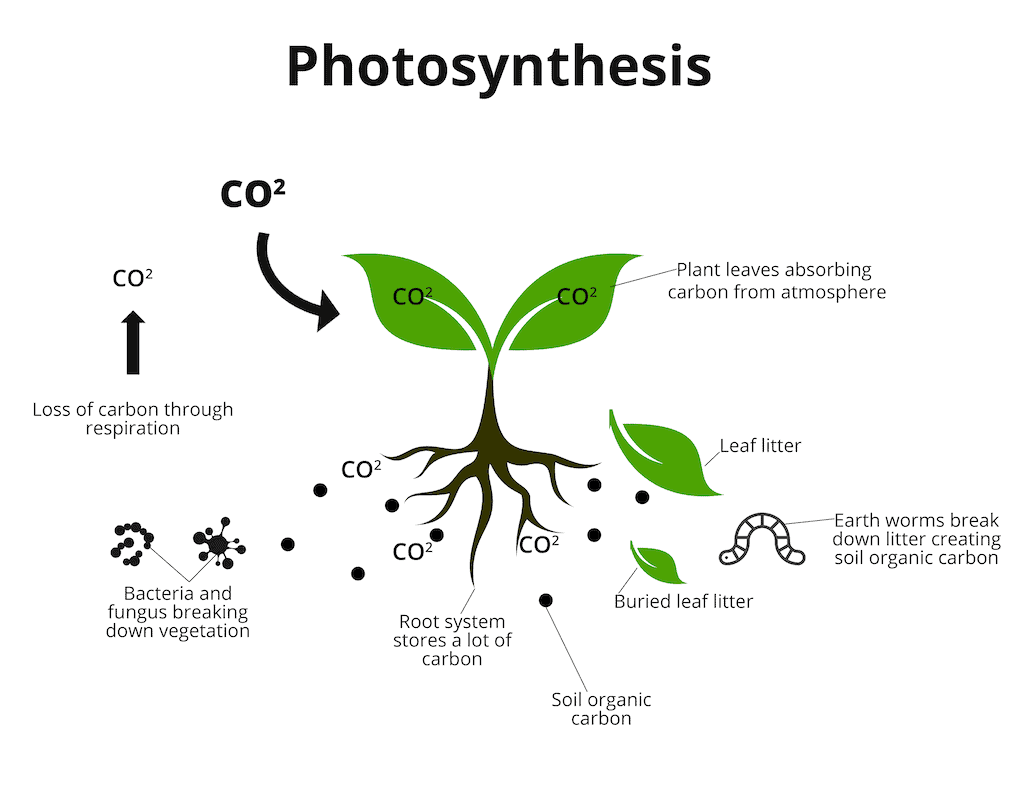 As well as removing carbon from the atmosphere, soil organic carbon also improves soil health as it promotes water retention and contains nitrogen and phosphorous which are essential to plant growth. So high levels of soil carbon equals high levels of farm productivity and a reduction of CO2 in the atmosphere – win, win!

Farming already captures a significant amount of carbon through crop land, hedgerows and semi-natural habitats which often contain large plants like trees which are more efficient at capturing CO2. Soil carbon sequestration can be further achieved through improving land management and changing land use to capture more carbon.

Here are some simple examples:

How long can soil carbon be stored?

Depending on the nature of preservation soil organic carbon has the potential to persist in the ecosystem for decades to centuries. However, for soil organic matter to be preserved long term soil sequestration methods need to be maintained as it is easily lost through soil erosion and leeching[1].

In 2015, the Olsen’s became the first farmers in Australia to receive carbon credits by storing an additional 11.3 tonnes of carbon per hectare of farmland. The Olsen family contributed this increase in carbon sequestration to new land management practices such as the use of cover crops, pression seed planting, and a reduction in tillage. Additionally, the newly adopted techniques also contributed to the farm becoming more drought resistant (as soil organic carbon can encourage water retention) and increased crop productivity [5].

Mr Crawley is a poultry farmer from the UK. He has planted 65,000 trees on 100 acres of land. Trees are larger plants which have the capacity to capture a lot of carbon during their lifespan. As well as reducing the farm’s carbon footprint, the trees also have great benefits for the welfare of his chickens. The shelter from the trees encourages the chickens to roam and also improves their feather cover which helps insulate the birds in the winter and summer [3].

Knepp Farm is a 3,500-acre estate in West Sussex.  The land was once intensively farmed but since 2001 it has been transformed into a pioneering rewilding project which offers solutions to some of the world’s most pressing problems which includes soil restoration and carbon sequestration. Carbon sequestration on the estate is achieved through habitat creation with native tree and plant species reclaiming the land and returning carbon to the soil. An additional benefit of rewilding is the appearance of extremely rare species like turtle doves, nightingales, peregrine falcons and purple emperor butterflies on the estate [6].

Knepp farm is not a traditional example of how farmers can improve soil sequestration, but it offers an effective alternative for failing or abandoned farmland. In absence of commercial farming products Knepp now offers a range of organic meats from the wild roaming residents of the estate (e.g. Tamworth pig sausages), and adventurous holiday makers can book onto safaris, guided walking tours, and even spend a couple of nights camping on the estate [6].

The post How Soil Carbon Sequestration can be applied to the agricultural industry? appeared first on Green Element.