How micro-businesses have blunted the economic impact of COVID-19 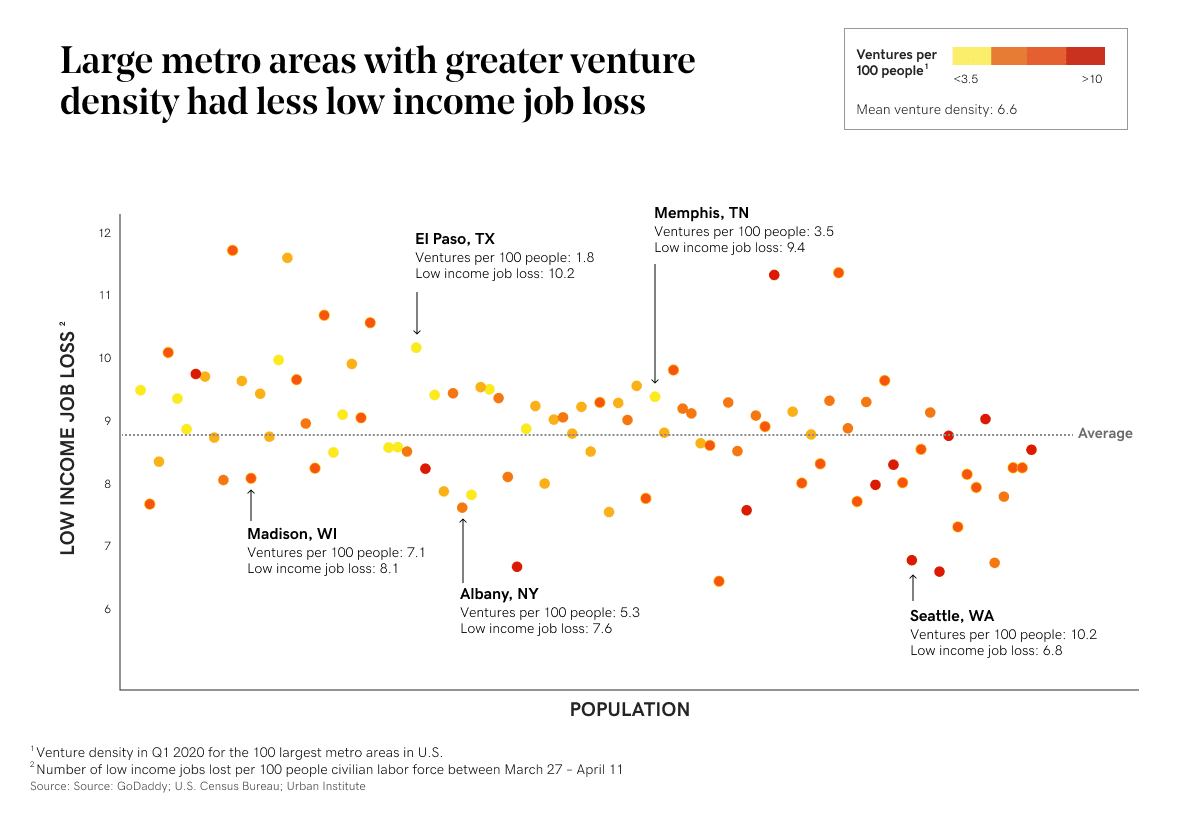 Digital businesses  — from part-time side hustles selling homemade jewelry to local restaurants that started fulfilling orders online during the pandemic — have helped U.S. communities weather the economic storm caused by the COVID-19 crisis.

Orders placed on such websites jumped 260% between January and April, as stay-at-home edicts caused consumers to move spending online.

The upshot is that communities with a higher concentration of these web-based micro-businesses tended to lose fewer jobs at the peak of the unemployment crisis.

These and other findings are part of a new dataset from Venture Forward, a multiyear research project that combines information about GoDaddy’s 20 million U.S. web domains with data from the Census Bureau, Bureau of Labor Statistics and similar sources.

Of these “ventures,” roughly 75% are businesses and the rest are a mix of nonprofits, civic groups and personal sites. Because many of these ventures aren’t incorporated or don’t have full-time employees, they’re often overlooked by traditional economic analyses.

The new data shows that even as 22% of small business owners closed shop between February and April, the number of ventures held steady. It also shows that as U.S. unemployment spiked to an all-time high, metro areas with more ventures per capita saw less job loss among those who have been hardest hit in the pandemic: low-income jobholders.

“Low-income jobs tend to be the first to go in any economic crisis, and are often the last ones to come back,” says Scott LaCombe, a professor of government and statistical data science at Smith College who was involved in the data analysis. “If you’re able to keep taking orders, it softens the hit to the people who normally bear the brunt.”

Ventures are a source of economic resilience

When GoDaddy released its initial batch of Venture Forward data in early April, before the pandemic had fully impacted the U.S., it showed, for the first time, a clear link between venture density and community prosperity. Working with our research partners at Arizona State University and the University of Iowa, we found that adding just one highly active venture — one that meets certain growth thresholds, such as increasing internet traffic or orders — per 100 people can boost a county’s household median income.

It also revealed a historical fact: Communities with higher venture density had more fully recovered from the 2008 recession.

The new findings look at ventures in the age of COVID-19. GoDaddy gathered the data between January 20 and April 27, when COVID-related job loss was at its peak. This new data reinforces the earlier conclusion that venture density, even in the midst of economic shock, increases economic resilience.

The data and visualization tools are available for download.

Among the more than 3,000 counties in the U.S., the number of ventures fell an average of 1.8%, based on GoDaddy’s data. That’s less than in a normal year at that time when people’s well-laid New Year’s plans to start a business with a new domain go awry, leading to an average 3% decrease in past years in terms of venture density.

The new COVID-period data set suggests that creative entrepreneurs are finding new ways to stay in business or start new ones. They’re setting up online shops or digitizing the physical ones they already run.

These include people like Zach Sass, a furloughed Nashville chef who started earning a primary income by setting up online cooking classes, and Patti Curtis, a former cosmetics executive and new art gallery owner in Seattle who now exhibits and sells work from her Fogue Studios & Gallery solely online

These ventures of necessity have stepped in to fill an important vacuum for Americans in the new stay-at-home world.

Along with information on the 20 million ventures in our dataset, we also have access to customized reports generated by about one million customers who use our marketing tools.

By aggregating (and anonymizing) these reports, we discovered that April orders placed on restaurant websites jumped 338% compared with traffic in January. Orders on other food-and-drink related sites, like grocers and wineries, grew 242%. Home services ventures, such as local plumbers and lawn care outfits, experienced a 187% spike in orders. Sites that categorize themselves as entertainment-focused, such as dating services and dance studios, saw a 224% uptick.

The characteristics of resilient communities

It turns out that ventures and communities are more than the sum of their parts. Just as mixing beans and rice creates a protein that doesn’t exist when eaten separately, researchers are discovering that ventures are most beneficial in combination with other indicators.

The likely explanation, says LaCombe, is that many small businesses didn’t have an active website, but then they built one, which now allows them to be recognized as ventures.

For example, Kings County, Washington, is above average in both categories. It had an unemployment rate in April of just 6%, less than half the rate of the average U.S. county. Similarly, Howard County, Maryland, which also ranks high for both broadband access and venture density, experienced an unemployment rate of just 5.7%.

It turns out, says Karen Mossberger, a public affairs professor at Arizona State University who helped analyze the Venture Forward data with Caroline Tolbert from the University of Iowa, that venture density actually signals how broadband is used.

Using broadband for social networking and streaming Netflix is fun and fine, but the real economic gains come when people start to see it as a means to create a business. Then, you get a virtuous cycle, with more companies selling to more residents, thereby creating more jobs and wealth.

“When people have regular access to broadband, they have time to explore and hone their skills,” she says. “That way, when they get an idea for something they can sell, they can do it with relatively little effort.”

The post How micro-businesses have blunted the economic impact of COVID-19 appeared first on GoDaddy Blog.