How does Proactive Customer Service Help Your Business?

Now that more interactions between customers and companies are taking place in public forums, being proactive has become increasingly important.  Today business has to contend with customer reviews coming via social media, online review sites, and beyond.

This has made the Customer Service stakes for your business higher than ever.  The attention given to your user experience is an investment in your businesses future.  Even with renewed focus, the vast majority of customer service resources are still reactive.

Everyone wants to know, “How can we best interact with customers who are seeking help, or who have complained?”  This is the approach of most businesses, waiting then reacting to feedback they receive.

It’s an outdated idea and approach which fails to make your customer service part of a better user experience.  Today, customer service has become a spectator sport with so much of it playing out in the public digital world of Facebook, Twitter, and other social media venues.

Your ability to handle customer questions and complaints better and faster will have a material impact on your business.  The best way to build your business and improve your customer experience isn’t to get better at reactive service.  Instead embrace providing a more PROACTIVE customer service.

The best complaint is the one that never has to be delivered?  You and your team already know what your customers are likely to complain about.  Despite a few outliers, most of your complaints over time fall into a few specific types that happen over and over.

Even though you know what your customers struggle with, you need to put your energy into getting out in front of these issues.  Often what creates these complaints can be fixed, sometimes simply by providing more information.

Proactive Customer Service on My Sink

Proactive customer service is critical for the continued success of tour company.  Nearly every business has similar and recurring customer satisfaction issues.  You must more effectively communicate with your customers to remove any knowledge gaps.  Doing this may solve many problems before your customer has the opportunity to complain.

Recently while on vacation in Palm Springs I something caught my attention.  As I was getting dressed to go to dinner with my wife, I found an outstanding example of proactive customer service.  Right there in my hotel room.  On the bath vanity was this sign, helpfully placed by the Renaissance Hotel. 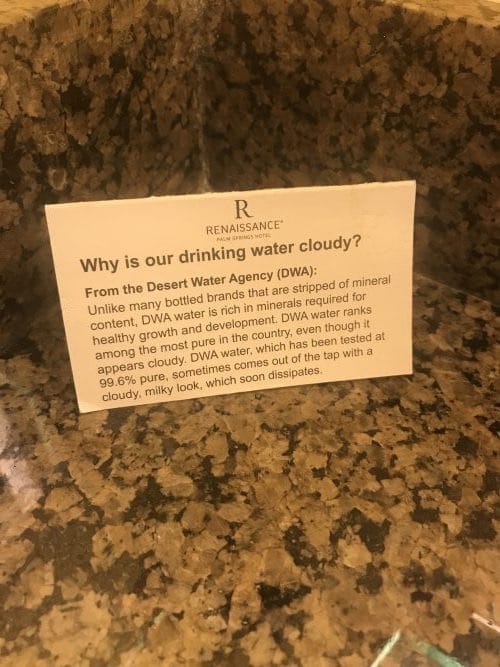 What a brilliant and proactive way to inform their guests.  Because the water out of my bathroom faucet was cloudy.  At first I found this a little disconcerting.  However after reading the sign I felt informed and educated.  I learned that the water was a natural, regional occurrence and the water was pure and full of “minerals required for healthy growth and development.”

One, simple sign turned my faucet water from a shortcoming to an elixir.  I’m not sure how long the signs have been in place.  But I can imagine how many calls were being placed to the front desk before the signs appeared.

The Renaissance is a large hotel, if only 20 percent of guests inquired about the water, you’d have dozens of calls every day.  Because of their proactive approach to customer service, I’m sure they’ve reduced their calls to just a few, if any.  This is a great example that showcases an innovative and proactive message turning a negative into a positive.

Wade discovered that his customers were leaving a lot of negative feedback.  They were either complaining to him and his team members, or they were writing bad company reviews on Yelp.  This confused Wade, he felt that his company was a solid operation with a strong commitment to giving customers a great experience.

He decided that he needed to dig deeper into the data.  After compiling and studying the data he realized that there were almost zero complaints about moving.  The complaints were mostly about related issues like show up times, parking, packing, and so forth.

This puzzled Wade because he felt that Square Cow worked hard to give their customers a great proactive customer service experience.  After Square Cow customers paid their deposit and booked a moving date, they are sent a welcome kit explaining the moving process.  Wade’s team also sends a reminder email seven days in advance of the move, including more helpful tips for their customers.  Finally, the night before, a voicemail was sent to confirm the job details.

Even after doing all of this, his customers were complaining that they just DIDN’T KNOW what to expect. The company thought customers were adequately informed, but the customers thought they were under-informed.  Their feelings created complaints.

And then Wade realized something.  All of his customers are in the process of moving.  When people move, they become a crazy people because it’s stressful to move.  Noone handles moving without stress.

Wade recognized that even though the company was sending information, it wasn’t sinking in with their customers.  Do you know how Square Cow reacted?  They doubled everything, sending two welcome kits.  They send two “here’s what to expect” emails.  Two reminders in the last days.  And guess what happened? All the complaints faded away.

Wade decided that no customer has ever said, “Please stop informing me so much.”

Your Customer Can Never Have Too Much Information

The message is that there’s no such thing as giving your customer too much information.  It’s true if you run a moving company.  Or just have cloudy water.

If you want to invest more time and money into your customer service, I agree with you 110 percent.  But don’t neglect engaging in proactive customer service.  You need to give your customers an experience that they will want to talk about.  The results will transform your business.